Exhibition in the Castle of Royal Dowry Town Mělník

On Saturday 9th September 2017 a new exhibition of aristocratic family trees called Aristocratic Message was opened in the Concert Hall of Mělník Castle during a usual guide tour. Each of the canvases revers dynasties of all those aristocrats who signed „ Proclamation of Bohemian and Moravian Nobility in September 1939“. It was already the third reaction of Bohemian provincial nobility in successsion to situation arising in times of highest jeopardy of the country. The document was published on 7th September 1939 already under Nazi occupation and to sign it meant not only to show agreement with its content but even a considerable level of courage and bravery.

Note: Some photographs are possible to enlarge by clicking on 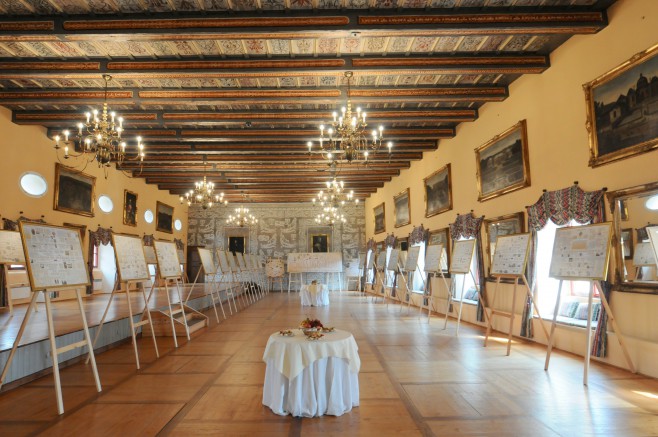 There were many of braves because when the original of the „third“ declaration was handed over to Emil Hácha on 6th October 1939 and its two copies to the Presidentś office on 11th October 1939,
85 aristocrats of 33 Bohemian provencial aristocratic dynasties were signed below the document. Among them also even Jan Lobkowicz (*1885 † 1952), grandfather of the contemporary owner of Mělník Castle Jiří, who is holdig the whole exhibition in honour of his grandpa and all of the other signatories.

There is Jan Drocár, the exhibitionś author, in the left photo down. On the right the exhibitionś organizer Jiří Lobkowicz standing in front of the family tree of his grandfather and a signatury of all of the three declarations Jan Lobkowicz from Mělník dynasty branch.

FAMILY TREE OF MĚLNÍK BRANCH OF LOBKOWICZ DYNASTY IN DETAIL

In their deed the aristocrats expressed unconditional loyalty to their native country and Czech nation and their descendants have right to be appropriately proud of their fathers, grandfathers and great grandfathers. But it is also obligation for them as Karel Schwarzenberg reminded in his letter to gathering of the signaturies ´descendats in Potštejn Castle in June 2012:

„ They were starry times but in other respects very sad period for our country. Czech nation was stood up for by represents of old families, who had responsibilities in their subconscious and which were imposed upon them by their appurtenance to Bohemian state and so they took duties and responsibilities in the capacity of Bohemian states.It was realy important because in the moment of collapsing the republic when many succumbed to despair, our fathers and grandfathers explicitly stood up for Czech nation. This declaration ,written by my father once, has been , as you may have learned, my obligation until now too. All of us should realize that in present time ,which is to a certain extent disappointment, we need to fight even if in other way.“

A photograph of Potštejn gathering of descendants of aristocratic declarations: in the castle, in the castle park, in St´Vavřinec Church where his Eminence Dominik Duka O.P, Cardinal and Arbishop of Prague officiated at a mass for all signaturies.

Declaration from September 1939 followed up with two previous declarations in 1938 and 1939. At first 12 deputies of aristocratic dynasties visited President Edvard Beneš on 17th September 1938 and in words by Count František Kinsky from Kostelec nad Orlicí they delivered him „ Declaration of Old Dynasties´Members with Respect to Immunity and Inviolability of the Czech State Territory“. Short time after Beneš abdicated and left for London the 12 aristocratic representants confirmed contain of the first declaration again to his successor in the president office Emil Hácha, who accepted it in Prague Castle – photo bellow

Signaturies are descendants of Charles IV

However, compared with exhibitions in The Mladotaś House in Prague Castle, Lysice, Kutná Hora even in The Czech Police Museum in Prague Karlov, Mělník exhibition is different. It gained broker and more extensit time dimension. Exhibition dominant family tree became a new genealogy study which presents signaturies of the aristocratic declaration from 1939 as descendants of The Holy Roman Emperor and Bohemian King Charles IV Luxembourg.

Other two smaller family trees depict newly even Charlesś IV ancestors. On the left of the main family tree on the spear-side, on the right on the distaff side. The ones on the spear-side lead over Charlesś father Jan Luxembourg to the first medieval Roman emperor Charlemagne. He was not only the first ancestor of Charles IV on the throne of Roman emperors but also his ancestor in the 20th generation.

On his motherś side direct ancestors of Charles IV are members of the first Bohemian princely and royal dynasty of Premyslids whose founders were the first historical verified Prince Borivoj and his wife St. Ludmila Pšov .According to Christian Legend Ludmila was a daughter of Duke Slavibor from Pšov. Pšov was an old name for Mělník which after marriage of Bořivoj and Ludmila in 874 went over under administration of the Přemyslids.

By genealogy putting through up to Charlemagne Aristocratic Messages were prolonged to more than thousand years. Between Charlemagneś death in 814 and signing „Declaration of Bohemian and Moravian Aristocracy in September 1939“ 1125 years passed. During the exhibition in the Czech Police Museum in Karlov, where family trees of signaturies could be seen, these dates and facts were „physically“ on display just next to each other. Since the Police Museum is closely adjacent to a church which was built in honour to Cherlemagne. His name is still included in its name: Church of the Assumption of the Virgin Mary and Charlemagne.

Monastery of Lateran Canonry of St. Augustin Order (today The Museum of The Czech Police)
with the exhibition „ Aristocratic messages“ relating to the year 1939, the first opening of this
exhibition to September 2014 in Mladotaś House in Prague Castle, the year of Charleś IV birth,
a constructor of the Charlemagneś church in Karlov in 1314, the date of Charlemagneś death
in 814 or the date of its consecration in 1377 – all of these are datas whose combinations many interesting anniversaries can arise from. The most evasive one is the period between Charlemagneś death and Chaleś IV birh
– 500 years.

The contemporaries do not often care the large time range – Ii did happen so long time ago. But if you do accomodate the presented anniversaries in form A4 paper it stops being such an unimanigable time range. Still it deals about 40 generations of Charlemagneś descendants but 40 people queuing for bananas, letś say, are not so big crowd, though. For example it is proved very convincingly by author of the first aristocratic declaration from 17th September 1938 Charles VI Prince Schwarzenberg (*1911+1986) in his ancestors chronology. He is a descendant of Charlemagne in the 40th generation, a descendant of Bohemian Prince Bořivoj and his wife St. Ludmila in 34th generation and a descendant of Charles IV in the 20th generation. Everything nicely on A4. Please, click here:
Ancestors of  Charles VI Schwarzenberga